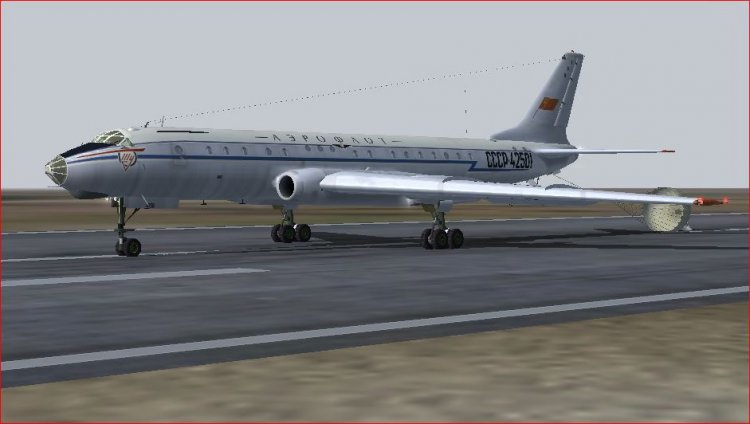 - Скриншот 2
- Скриншот 3
I present here reworks of Michael Stepanovs Tu-104 B and Tu-104 A of Tu-104 Project Team. It is part of the preparation for a hosting of Tu-104s at a virtual airliner museum. For that new textures could be added. A new sound is presented with the B-model 1976.
Following versions are planned:
Tu-104 with the a panel around 1959 (nearly the same as Michael Stepanovs one)
Tu-104 A with a panel around 1966 (according Aeroflot manual of that year).
Tu-104 A with a panel around 1966 as presumably used by CSA on its routes outside the USSR.
Tu 104 B with a panel around 1976 (according Aeroflot manual of that year)
Tu 104 E with a modernized panel similar to the Tu-114, more powerful engines and bigger tanks which is mainly a result of extrapolation and guess-work.
For going on with the preparation of the hosting of the Tu-104s I need the permission of the original authors: Michael Stepanov for his Tu-104 B and his panel, Oleg Chernikov for his flight dynamics, Samdim and SCS design for using several of their gauges, from Project Tupolev and from Tu-104 Project Team.
The hosting at the virtual airliner museum will not influence the rights of the original authors in any way and they would be named in that hosting.
If you can accept please let me know it.
WalterLeo